Made for a Ludum Dare competition, Flatgub’s playful throwback Caveman Harry tackles the assigned theme “Ancient Technology” on two different levels: First, it sets itself in a prehistoric community (which–spoiler alert!–follows a videogame tradition at least as old as The Lost Vikings in orchestrating a meeting between primitive humans and advanced or alien technology). The other is an aesthetic and technical imitation of old ZX Spectrum games, albeit with a fantasy color palette.

The narrative setting finds Harry searching for how to feed his friends and family in the absence of a spear-wielding hunter, but while spears litter the ground, Harry can’t wield one. He’ll provide another way. It’s retro platforming distilled to its basic elements: Harry jumps and walks (and climbs ladders and drops through certain platforms). Enemies follow scripted horizontal and vertical movement paths without any particular intelligence. That’s it. And the game utilizes those simple elements to their fullest, putting them in combinations that may not be groundbreaking (the arrangements of such challenges are by no means unique), but nonetheless feel compelling and fun thanks to the game’s overall presentation.

Caveman Harry attempts to embody its ZX Spectrum platform inspiration beyond mere window dressing. This is where the game derives a great portion of its charms as well as its frustrations. Harry and enemies are one-color sprites and their movement is discretely tile-based. Harry’s jumps aren’t the hyper-responsive and user-friendly actions we’re accustomed to this century. If you launch him into the air while walking, you have some latitude for moving him mid-air up to a certain point in his descent, after which he’ll drop like a slow-falling stone. He hovers at the peak of his jump just long enough to let a fast-moving enemy dash underneath him. It feels like the kind of jump one might encounter in an older computer or console platform, before the norms of the genre were settled. The game derives a great deal of personality from this embrace of old tech. In certain rooms, this embrace can prove a little frustrating since small enemy sprites seem to have hitboxes larger than their onscreen appearance suggests, but the overall package seems to make that go down easier.

Part of what makes the game such a memorable experience is the gorgeous realization of its world, in muted but colorful tones and sprite work that is spare but never dull. In addition, the world is populated with little creatures and other NPCs who talk when Harry’s positioned over them. It’s a simple addition, but one that invigorates the thinly sketched world with a great deal of life.

There are echoes of other platforming adventures of the last decade in Caveman Harry‘s makeup, such as J. Kyle Pittman’s You Have to Win the Game or Terry Cavanaugh’s VVVVV, with screen-to-screen movement, with rooms bearing titles, flavoring the experience or providing hints, in an interlocking structure that grants you glimpses of things you won’t access till later. Caveman Harry presents a bite-sized and mechanically simple adventure that feels comfortably suited to the little white pixelated caveman on your screen.

Caveman Harry is available for Windows for free or pay what you want from itch.io. Flatgub has made the Game Maker source code available, too. You can follow Flatgub on Twitter.

It almost feels perverse to write words about ᗢ, a game that refuses words even in its title. ᗢ is sublime.

You control a little black cat rendered in remarkably efficient pixels (the game is a blown up 64×64 pixel screen). As you might expect, the cat is sleeping when you start the game. Cats love to sleep. The cat will sleep if you leave it alone long enough. As you might not expect, your cat is going to spend a lot of the game swimming. Cats famously don’t love to swim. But this cat finds itself on a tiny little island in the middle of a chain of tiny little islands and the only way to get anywhere is to swim.

You can scurry up trees to see a bit further. You can only swim so far before you need to catch your breath on land.

One of the first things you’ll likely encounter are a few birds hanging out in some bushes. They’ll take flight when you get near. You might wonder what else will react to your presence and how.

There is a strong possibility there is something I don’t know about ᗢ, something someone else might find and think critical to the entire experience. I feel like each time I play it I end up somewhere slightly different. Or I can’t find my way back to somewhere I just was. Often I find myself visiting the same islands and encountering the same things, but that’s where my own particular patterns of curiosity compel me. Curiosity. Like a cat.

There’s the relaxing, repetitive roar of the tide (curl up in a little ball and take a nap on the shore and listen to it). Sometimes there’s music (by mc hepher): playful, melancholy, curious.

ᗢ is available for Windows for free or pay what you want from itch.io. 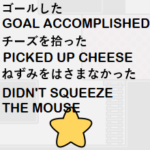 Ismail Hassan made Is That Bird Holding a Cat? in ten days (or less) for the fifth annual GBJAM, an event that asks players to obey the Game Boy’s four-color palette restriction, the system’s 160×144 resolution, and to create something “Game Boy-themed.” This game certainly obeys these three tenets. Keyboard-controlled, the game first flashes the keyboard keys it uses not with descriptions of what those keys do, but with what keys on the Game Boy hardware they substitute for in a familiar murky green palette. It’s a small gesture, but it’s clever.

Yet Hassan has not chosen to make something that feels like it could be on the Game Boy (unlike some others from the same jam, such as Witchwood Academy), instead taking advantage of the processing power of a computer from this decade to create more complex, contemporary-feeling camera panning/object following and parallax scrolling than might have been possible on the Game Boy, let alone advisable. The game adheres to a tidy 160×144 resolution, but blows itself up to 3 times that (at least, unless you hit Alt+Enter to go fullscreen) in order to render what might have dissolved into a messy swamp of pixels on even a Game Boy Advance SP legible. The effect is something like a fantasy scenario in which the Game Boy’s guts got upgraded, but the buttons and screen stayed rooted in 1989.

Like The Lost Vikings (Silicon & Synapse, 1993), Is That Bird Holding a Cat? asks you to switch player characters on the fly (forgive the pun). In this case, we indeed have a bird and a cat that must find their way to their individually marked goal posts. The characters have two different movesets. The cat agilely zips around stages, hopping over deathtraps and scurrying through little crevices. The bird can’t walk and therefore can’t really platform, but has an unlimited flying ability. This ability isn’t quite so precise and agile as the cat, though, putting a much-needed limitation on what could make the bird too powerful.

The bird and the cat well thought out in their contrasts (they’re also adorable!). You’ll encounter situations where you could conceivably use either and situations where you simply must use one character to reach a key.  But the game really sings when it forces the characters to really cooperate. As the title suggests, the bird can hold a cat for only so long. The bird can fly forever on its own, but the second it picks up the cat, a stamina bar appears that severely limits the distance and height the cat can be carried and requires real forethought as players tackle levels.

The game’s weakest point is a level design that favors a too-quick ramping up of difficulty. The game’s somewhat overeager hit detection, too, makes some passages frustratingly finicky and certain large projectiles move with a pace that doesn’t quite mesh with the small area of the screen. I’m actually quite grateful Hassan has made available a version that comes with stages pre-unlocked (the initial release requires a linear progression through stages). I haven’t cleared every stage, but I’ve been delighted to move on from stages that get overly frustrating, so I can see each stage and situation the game has in store for me. The interaction between the bird and the cat is a delight and, coupled with their immense cuteness, contrasts excellently with the weirdness and hostility of their environs. Helping them struggle through the air together makes this game well worth playing.

Is That Bird Holding a Cat? is available on Windows for free from itch.io. You can follow the developer Ismail Hassan at @LifeAfterLunch.